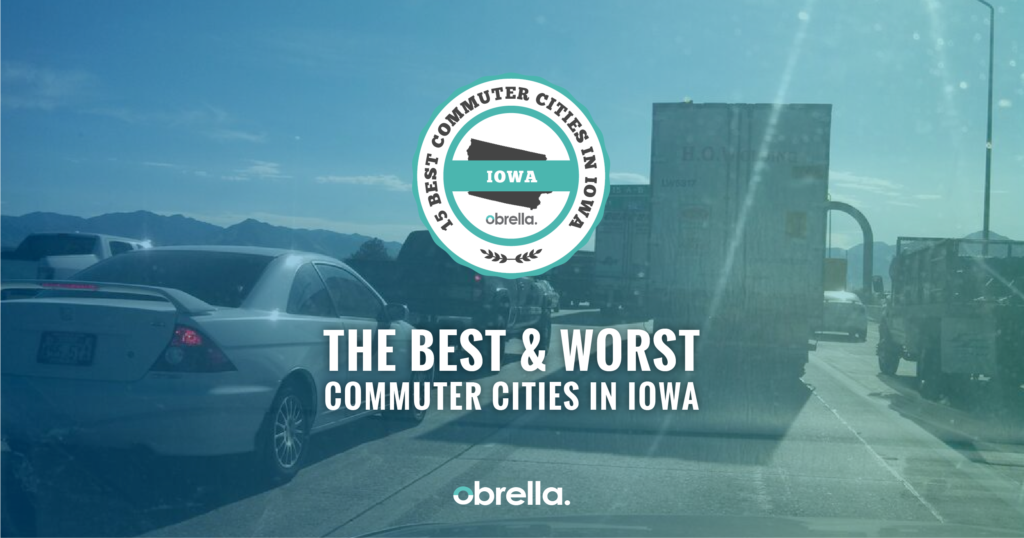 With an average commute time of 18.5 minutes, Iowa is the seventh best commuter state in the nation. That’s certainly impressive, but to take it a step further, we found 15 cities in the Hawkeye State where commute times average a mere 13 minutes. That’s almost half the national average of 25.2 minutes. This means, over the course of a year, the residents of Iowa’s best commuter cities spend 4.6 days commuting, whereas the typical American workers spends nine days on the road.

A long commute can do more than stress you out; it can also raise your auto insurance premium. Likewise, a short commute may reduce the stress of getting to and from work, and reward you with a more competitive auto insurance rate. That’s why we’re recognizing the best commuter cities in Iowa. To create our best commuter cites list, we analyzed traffic data from the most recent U.S. Census Bureau survey and then identified cities with a population of 5,000 residents or more at the time of the 2013 Census Survey.

The longer you spend getting to and from work, the greater the chance you’ll be involved in an accident. Because of this, workers with long commutes tend to pay more for auto insurance than workers with short commutes. That’s why insurance agents will ask how far you commute before quoting you an auto insurance rate.

Several leading studies reveal that long commutes can be detrimental to our lives. Consider these findings.

As you can see, saving money on car insurance is just one of several reasons to shorten your commute. Take inspiration from the 15 best commuter cities in Iowa and consider ways to reduce the time you spend getting to and from work.

The 15 Best Commuter Cities in Iowa

The best commuter city on our list is located in Sioux County, which has the fastest commute times of any county in the state. Progressive and diverse, Orange City offers a variety of positions in education and manufacturing, and Orange City Area Health System provides locals with nearly 700 positions in healthcare. With opportunities like these, Orange City residents don’t have to travel far to find employment. As a result, almost 82 percent of workers spend less than 15 minutes behind the wheel. We are impressed that although the population in Sioux Center has increased by 35 percent since 1990, commuters spend 54 percent less time travelling to work than most Americans. One reason why that may be is because Sioux Center offers a variety of local employment opportunities. Jobs in agribusiness are common, but the manufacturing and retail sectors are also strong in Sioux Center. We congratulate Pella for having the highest rate of mass transit users of any city on our list. That helps keep traffic congestion to a minimum and could be why, despite being the second most populated city, 8 in 10 Pella residents get to work in less than 15 minutes. When they do, many have manufacturing or management jobs at places like Vermeer Manufacturing Company or Pella Corporation, a well-known window company. Careers in education are also abundant due to the proximity of Central College. A thriving business community, safe neighborhoods, and good schools earn Carroll kudos as a great place to live, work, and raise a family. The recent addition of a citywide fiber gigabit network only adds to Carroll’s appeal, and may increase the already high percentage of residents who work from home. More telecommuters means fewer cars on the road, and that could result in even faster commute times. Decorah was named one of the top 100 small towns in the Midwest due to the quality of life and vibrant business opportunities it offers. Decorah also attracts attention because of its progressive sustainability plan. For these reasons and more, Decorah is an especially popular place for young professionals to settle. When they do, there’s a 91 percent chance they’ll get to their job in 29 minutes or less. Spencer provides the charms of small town living, like low crime and friendly neighbors, but also offers perks usually associated with larger cities, such as a nationally recognized cultural scene. These things make Spencer a wonderful place to live, but it’s also a great place to work. Spencer is part of the Iowa Lakes Corridor Development Corporation, which helps employers launch and grow their businesses. It also helps people find good jobs at places like Simonsen Iron Works and Maurer Manufacturing Metal Works, two of the area’s major employers. Local jobs mean residents don’t have to travel far for work and that keeps the average commute to a mere 12 minutes. Storm Lake offers a variety of employer and employee programs that keep jobs local. We are particularly impressed with its participation in Home Base Iowa, an initiative that provides veterans with financial incentives and career development training. In addition to innovative programming, Storm Lake also earns our praise for its rate of carpoolers. At 14 percent, Storm Lake has one of the highest percentages of carpoolers of any city on our list. That helps keep traffic to a minimum and commutes to a mere 12.9 minutes. It’s no wonder Mayor Ed Malloy is proud of Fairfield. The city has received several awards for being a great place to launch a business, including being named “The Most Entrepreneurial Community in America” and “Iowa’s Most Entrepreneurial Community.” In addition to being pro-business, Fairfield is also a healthy place to call home. Recently, it was named an Iowa Blue Zone due to its commitment to improving the health, well-being, and longevity of its citizens.

Compared to the other cities on our list, Fairfield has more than twice the percentage of people who work from home, and that’s probably one reason 8 in 10 residents commute less than 15 minutes. Denison uses innovative techniques to entice businesses to open or expand within its boundaries. One example is its virtual building program that allows business owners to see their facility, including its interior and exterior layout, in a virtual setting. Add in the fact that Denison is the only city in Iowa to have a Job Corps facility, and it’s easy to understand why major employers like Tyson Fresh Meats and Farmland Foods set up shop here.

Almost 1/4 of Denison workers either carpool or telecommute to their jobs, and that’s one reason the commute in Denison is 48 percent faster than the national average. Grinnell’s proximity to Interstate 80 make it a convenient and desirable location for businesses that want access to a fast distribution route. It’s also part of the award winning Poweshiek Iowa Development organization, which promotes job growth in the area through a variety of services and resources. Grinnell’s location, pro-business atmosphere, and short commute time of 13.6 minutes are a few reasons it was named one of the 100 best small towns in America. Business is booming in Webster City. WCF Financial Bank recently expanded operations and moved into a new building. The local hospital is adding a state-of-the-art medical clinic and Shopko will open its doors this summer. The jobs created by these business improvements may mean more Webster City residents can work where they live, and that could further reduce Webster City’s already remarkable commute time of 13.7 minutes. Clarinda is a family friendly town that offers a wealth of economic opportunities, which make it an ideal place to live and work. For example, the Clarinda Economic Development Corporation and the Revolving Loan Fund help attract and fund small and emerging businesses in Clarinda. This helps boost local job opportunities, so parents can spend less time commuting and have more time for their families. In fact, the average Clarinda commuter enjoys a drive to work that’s 45 percent faster than most Americans. A modern hospital, expansions to the local schools, and increased recreational opportunities are just a few reasons Mayor Steve Brimhall and the citizens of Mount Pleasant are proud of their developing community. A short commute time is another. Only one percent or Mount Pleasant residents commute for 60 minutes or longer, and nearly 8 in 10 get to their place of employment in less than 15 minutes. Creston is home to Buena Vista University, Greater Regional Medical Center, and Southwestern Community College, so jobs in healthcare and education are common. But Creston also boasts strong manufacturing, service, and retail sectors. As a result, Creston’s employment opportunities are diverse, and this means those who want to work where they live have a good chance of doing so. That could be why most Creston commuters get to their place of employment 10 minutes faster than the typical American worker. The population of Algona has grown by 45 percent since 2000, but thanks to careful planning, the time it takes for worker to get to their jobs hasn’t been negatively impacted. Another reason Algona’s commutes remain short is because 14 percent of residents either carpool or work from home. That’s one of the highest rates of all the cities on our list, and this fact certainly earns our praise. With an average commute of 22 minutes, residents of Iowa’s worst commuter cities still get from home to the office three minutes faster than workers in most American cities. Add in the fact that 40 percent commute for less than 15 minutes and only three percent commute for 60 minutes or longer, and it’s easy to see why people still choose to call these cities home. METHODOLOGY
To determine the rankings, Obrella analyzed traffic data from the 2013 survey released by the U.S. Census Bureau. Considering only Iowa cities whose population exceeded 5,000 at the time of this report, Obrella analysts sorted cities by average commute time and used other available data points to help visualize the breakdown of commute types and commute lengths. Please contact [email protected] with any questions about this report.