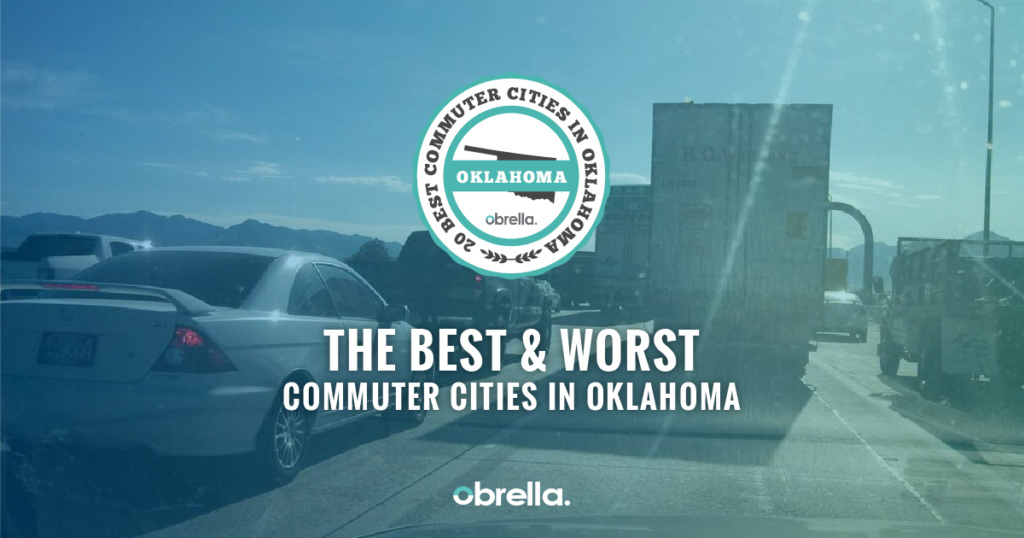 Boasting an average commute time of 20.7 minutes, the typical Sooner gets to work five minutes faster than most Americans, and this means Oklahoma is the 10th best state in the nation for commuters. Residents of the state’s 20 best commuter cities get to their place of employment in even less time – a mere 16.8 minutes. This could be due in part to a high percentage of carpoolers. On average, the best commuter cities had a carpooling rate of 14 percent, which is 50 percent higher than the national average.

Most people don’t think about how the amount of time they spend getting to work impacts their life, but a long commute can be more than just an inconvenience. In fact, spending a long time behind the wheel on your way to and from work can increase stress and raise your auto insurance premium. On the other hand, a short commute may keep stress at bay, and could mean you’ll enjoy a more competitive auto insurance rate, and that’s why the best commuter cities in Oklahoma deserve recognition. 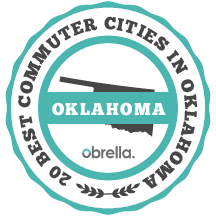 Our best commuter cities list was created by analyzing traffic data from the most recent U.S. Census Bureau survey and then identifying cities with a population of 5,000 residents or more at the time of the 2013 Census Survey.

Click here to see the worst commuter cities in Oklahoma.

The chance you’ll be involved in an accident increases the more time you spend behind the wheel. So, workers with long commutes often pay higher auto insurance premiums than workers with short commutes. That’s why your insurance agent will ask how far you commute when setting up your policy.

Several leading studies reveal that long commutes can be detrimental to our lives. Consider these findings.

Shortening your commute can reward you in several ways, not the least of which may be saving money on your auto insurance premium. Take a few tips from the 20 best commuter cities in Oklahoma and find a way to reduce the time you spend getting to work.

The best commuter city on our list is home to Altus Air Force Base and other leading companies like Southwest Technology Center and Aviation Training Consulting. Altus is also one of the most productive agricultural regions in the U.S., so generations of families are involved in managing crops. With career opportunities like these, Altus locals don’t have to travel far to find employment. In fact, Altus has the second highest percentage of workers who commute for less than 15 minutes — an impressive 74 percent. Residents of the second best commuter city in Oklahoma have a lot of opportunities to hone their skills because the Pioneer Technology Center is located in Ponca City and Oklahoma State University is within driving distance. This attracts businesses that want trained employees, which gives residents a variety of local job opportunities. As a result, 93 percent of residents enjoy a commute that’s 29 minutes or less. Ada is perfectly positioned to offer commuters an easy drive to three major cities, or they can work right at home at places such as the EPA Water Laboratory, one of the region’s major employers. Either way, 73 percent of Ada workers spend less than 15 minutes behind the wheel, which is the second highest rate of the cities on our list. 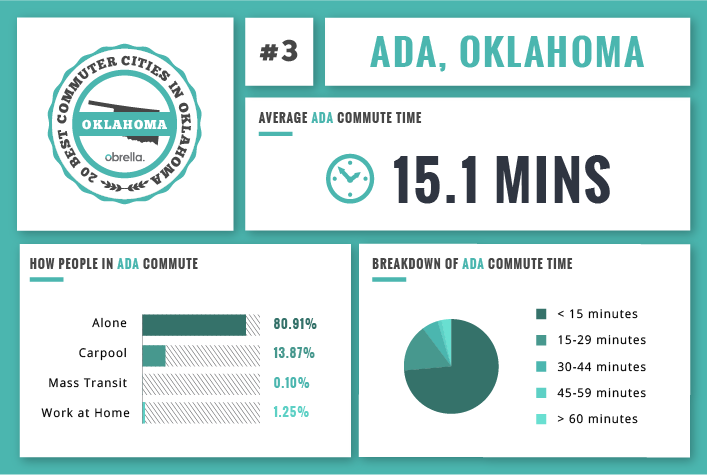 Due to its low cost of living and numerous opportunities for work and play, Clinton is recognized as the hub city of Western Oklahoma. A tight-knit community that’s built on agriculture and industry, Clinton offers easy access to two major highways as well as a regional airport. Its appealing location draws businesses, and that means residents don’t have to commute far. When they head to work, nearly 22 percent of commuters carpool. That’s more than twice the national average and could be why 73 percent of residents get to work in less than 15 minutes. The commuter friendly community of Watonga is dedicated to setting its citizens up for success, and that starts with education. Watonga offers students experienced teachers, access to the Chisholm Trail Technology Center, and provides a robust college bound curriculum that 92 percent of students partake in. All this, plus Watonga boasts short commute times. In fact, 75 percent of Watonga workers spend 15 minutes or less driving to work, which is one of the highest percentages of any city on our list. Guymon is the largest city in the Panhandle of Oklahoma. One reason the community enjoys success is due to its economic development efforts which helped diversify local industry. It’s also a Certified Industrial Park and Enterprise Zone, and that means Guymon offers a number of business building incentives. The creation of local jobs means Guymon residents spend 38 percent less time getting to and from work than the typical U.S. citizen. From tax breaks to building improvements, Stillwater offers a wealth of resources for entrepreneurs who want to set up shop in its downtown district. The city’s dedication to revitalization helped create jobs that allow locals to work close to home. This could be why 7 in 10 Stillwater residents get to the office in less than 15 minutes and 2 in 10 make the trip in 29 minutes or less. Situated between two U.S. highways and not far from a major metropolitan area, McAlester’s location appeals to businesses like Spirit Aerostructures, which is one of the area’s significant employers. A hearty local economy means the typical McAlester worker enjoys a commute that’s nine minutes faster than most Americans. Weatherford is commonly referred to as the western capital of Oklahoma. It’s honored as one of the top-ten fastest growing towns in America, but that hasn’t had a negative impact on commutes. In fact, the average Weatherford resident gets to their office 35 percent faster than most Americans. Idabel is a forward thinking city located near the borders of Texas and Arkansas. Noted for low crime, affordable housing, and charming neighborhoods, Idabel also boasts an amazing school system and wonderful parks. With so much to offer, we weren’t surprised to find those who settle in Idabel tend to stay. When they do, nearly 9 in 10 get to work in 29 minutes or less. The residents of Enid have a lot to brag about. Not only do they live in a commuter friendly city, they also live in one of the state’s fastest growing areas. Last year alone, more than $1 billion in construction projects got underway. Expanding local employment opportunities is one reason why 6 in 10 Enid residents commute less than 15 minutes. The third largest city in Oklahoma, Lawton has been recognized by “Forbes” as one of the “Best Places for Business and Careers.” Many locals are employed at the Fort Sill Army post, but the medical and banking sectors are also strong. Make the move to this booming Sooner State city and there’s a 91 percent chance you’ll get to work in 29 minutes or less. 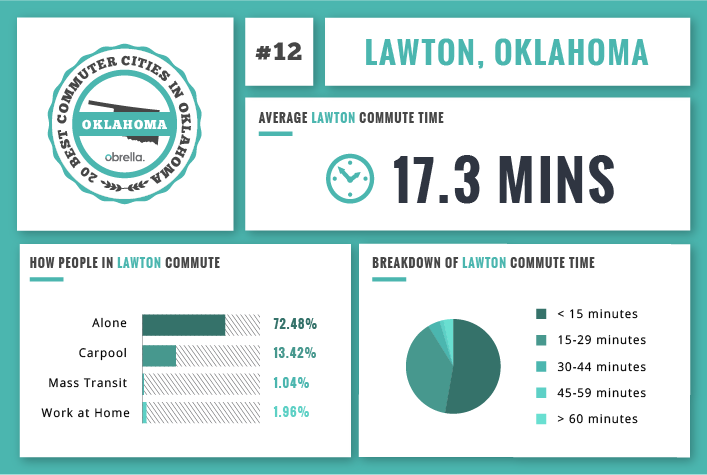 Low cost of construction, reasonable utility rates, and an excellent location are a few reasons businesses set up shop in Ardmore. As a result of local opportunities, the average Ardmore worker gets to their job in 1/3 of the time most American’s do. Pauls Valley does an excellent job of promoting itself as an ideal place to work, live, and play. The community’s marketing-savvy team helped revitalize the city and created jobs, which means its citizens don’t have to travel far for employment. Over 66 percent of Pauls Valley workers get to the office in less than 15 minutes, which we find quite impressive. Woodward is not only the commercial center for 70,000 people, it’s also gaining a reputation as Oklahoma’s sustainable energy hub. There are currently 38,000 megawatts of wind generation created in the area, and a new wind energy venture is also in development. With this venture comes new jobs, which is welcomed news for Woodward residents who want to reduce their already enviable commute time of 18.3 minutes by working in their hometown. Elk City’s lively downtown shopping district, abundance of popular events, and its National Route 66 Museum make the city attractive to visitors. Its friendly people, small town charm, and short commutes are some elements of Elk City that turn visitors into residents. With all there is to see and do in Elk City, it’s great that residents get to work 28 percent faster than most U.S. workers. This way, they can spend more time enjoying their town instead of driving through it. theast Oklahoma, Vinita is a small town with a lot going on. Businesses are thriving, the school systems are excellent, and Vinita was recently named one of the safest cities in the state. In fact, the chance of being a victim of crime in Vinita is half the national average. All this plus Vinita offers a commute that’s seven minutes faster than workers in most American cities enjoy. If you’re looking for a progressive community that offers abundant recreation and short commutes, you’ll want to get to know Durant. It’s situated in south-central Oklahoma, 10 miles from Lake Texoma, one of the country’s largest man-made lakes. It’s also home to Southeastern Oklahoma State University, which is one of the area’s major employers. Commute times in Durant are 25 percent faster than the national average, and the installation of a new city bypass could even further help reduce the time it takes to get to work.

Muskogee is situated in northeast Oklahoma, along the Arkansas River. It’s noted for its robust healthcare system and for being home to three leading universities, but Muskogee also offers progressive programs that ensure the city remains a great place to live and work for future generations. Best yet, despite being one of the most populated cities on our list, roughly 55 percent of Muskogee’s workers get from home to the office in less than 15 minutes. 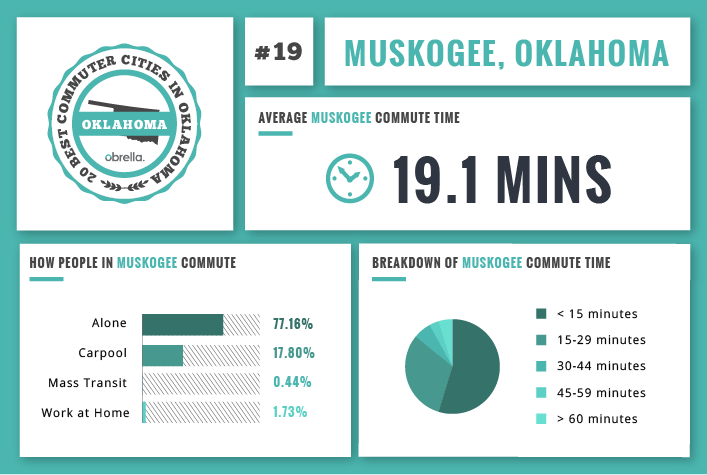 METHODOLOGY
To determine the rankings, Obrella analyzed traffic data from the 2013 survey released by the U.S. Census Bureau. Considering only Oklahoma cities whose population exceeded 5,000 at the time of this report, Obrella analysts sorted cities by average commute time and used other available data points to help visualize the breakdown of commute types and commute lengths. Please contact [email protected] with any questions about this report.